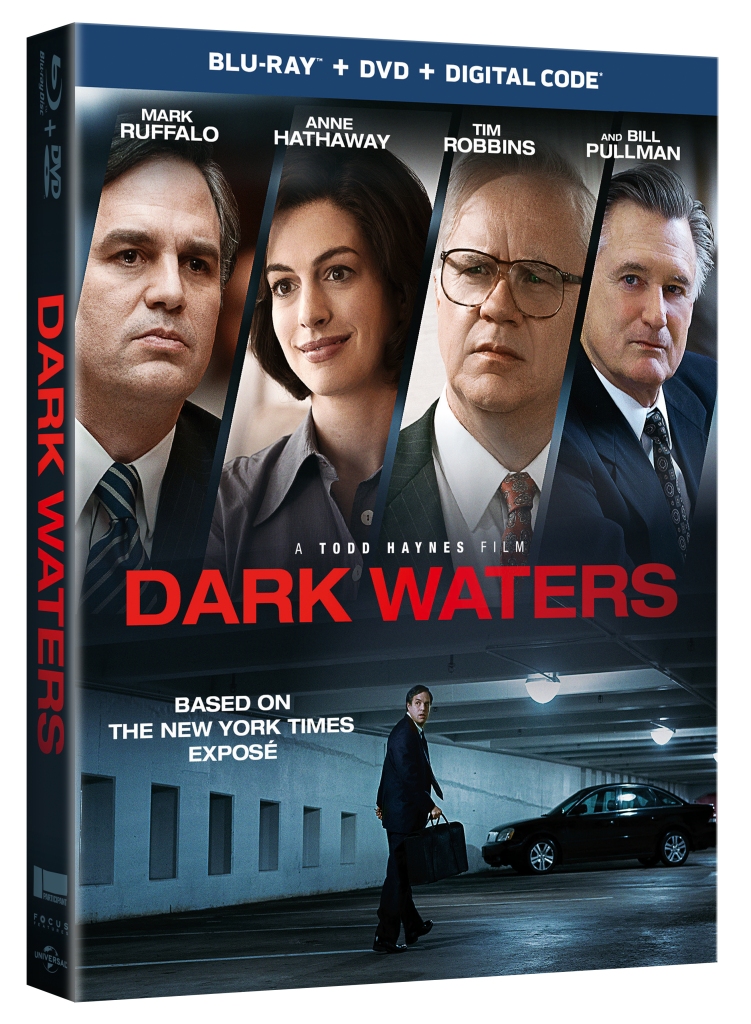 I received a screener for the 2019 hit film DARK WATERS, currently on Digital and releasing Tuesday, March 3 on Blu-ray and DVD. I knew about the film, and its certified fresh score on Rotten Tomatoes, but had no idea how entranced I would be while watching it.

Based on the 2016 New York Times magazine article, “The Lawyer Who Became DuPont’s Worst Nightmare” by Nathaniel Rich, “Dark Waters” is the story of Rob Bilott, portrayed by Mark Ruffalo (Spotlight, Avengers: End Game), a former corporate lawyer specializing in environmental law who goes from working with large corporations to suing and taking on the corporate giant DuPont – whose gross negligence and disregard for the environment/water supplies led to an extraordinary amount of deaths and illnesses in impacted communities.

When farmer Wilbur Tennant, performed by a spectacular Bill Camp (The Kitchen, Joker), brings to Bilott’s attention the deaths of multiple farm animals and his suspicions of a cover up by DuPont – as well as officials and veterinarians in his town – the attorney makes a life-altering decision to seek justice. His research finds that the company knowingly hid information about the chemical PFOA-C8 – commonly known as Teflon, a “forever chemical” that does not leave the bloodstream once ingested – from the EPA, who subsequently wasn’t regulating it.

The film then chronicles the nineteen-year-period that it takes for Bilott to get justice served for his clients – with DuPont eventually settling to pay 671 million dollars to claimants – without ever admitting wrong doing.

In a bittersweet tribute, it concludes with the song “I Won’t Back Down” by the late Johnny Cash while displaying portraits of the real Rob and Sarah Bilott (an underused, but still a standout, Anne Hathaway), and a few real life victims highlighted in the film – Darlene and Joe Kiger, who were severely ostracized by their community after filing an early lawsuit, Jim Tennant, the brother of the late Wilbur Tennant, and William “Bucky” Bailey who was born with a severe facial deformity, a direct result of his mother’s work on a DuPont Teflon line.

Albeit a true story, the film is suspenseful and expertly crafted, with stunning visuals that equally focus on the beauty and dread of the impacted communities.

Mark Ruffalo as Bilott is a master at work, expertly pulling the heartstrings and evoking the fears of viewers, and Tim Robbins gives a phenomenal performance as his administrator Tom Terp.

A remarkable David vs. Goliath story, “Dark Waters” is also the ultimate display of the human spirit – especially in light of the heavy tolls it took on Bilottt’s health, finances and family as well as those whose lives were forever impacted by the atrocities committed. I would rate it 4 out of 5 beats on the MMTrometer.

DARK WATERS is out now on Digital and available on Blu-ray and DVD on March 3.

The Rotten Tomatoes Certified Fresh® DARK WATERS is one of the most important films of the year and stars Academy Award® Nominee Mark Ruffalo (Avengers: End Game, Spotlight), as the tenacious attorney who uncovers a dark secret that connects a growing number of unexplained deaths to one of the world’s largest corporations. In the process, he risks everything – his future, his family, and his own life – to expose the truth. Ruffalo is accompanied by outstanding performances from the critically acclaimed supporting cast including Anne Hathaway (Interstellar, Les Misérables), Tim Robbins (War of the Worlds, The Shawshank Redemption) Bill Pullman (The Equalizer 2, TV’s “The Sinner”) and Bill Camp (12 Years a Slave, Joker) in this gripping thriller. With a script by Mario Correa and Matthew Michael Carnahan (World War Z), based on the New York Times Magazine article “The Lawyer Who Became DuPont’s Worst Nightmare” by Nathaniel Rich, and produced by Ruffalo, Pamela Koffler (One Hour Photo) and Christine Vachon (Carol), with executive producers Jeff Skoll (The Help, Lincoln), Jonathan King (Lincoln), Robert Kessel (Wonder) and Michael Sledd (I, Tonya, The Founder, Dallas Buyers Club), DARK WATERS is a powerful drama-thriller that everyone needs to see.

DARK WATERS will be available on Blu-ray™️, DVD and Digital.