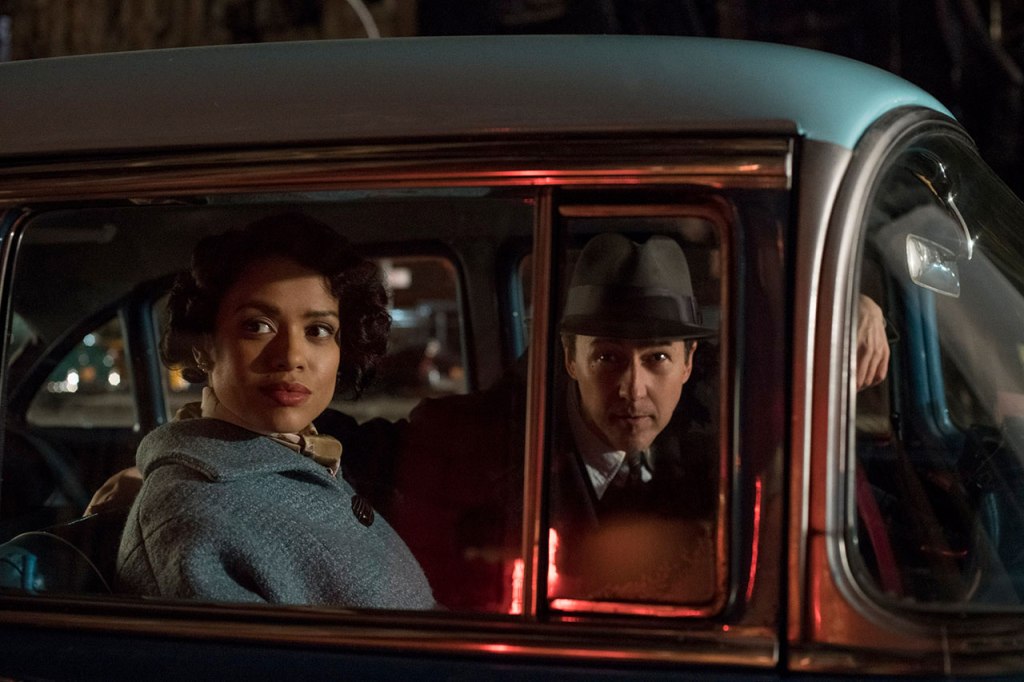 From the viewing of trailer one, I anticipated the release of MOTHERLESS BROOKLYN. The Neo-noir genre, the casting – which included Edward Norton, Bruce Willis, Gugu Mbatha-Raw, Willem Dafoe, Michael Kenneth Williams, Alec Baldwin – and the old school setting with its classic cars, wardrobe and style, had me ready to view and digest everything about it.

But family, after screening I was so disappointed with this film as a whole. First off, the trailer was deceiving and the movie is not as suspenseful as it appears. Adapted from the detective novel of the same name by Jonathan Lethem, and with a setting moved from the 1990’s to the 1950’s, “Motherless Brooklyn” is a grand effort for producer/director Edward Norton, who also stars as lead, that took on several social themes – including race, wealth disparity, and gentrification.

In the film, Norton plays Lionel Essrog, a private detective living with Tourette Syndrome determined to solve the murder of mentor and close friend, Frank Minna (Willis). With meager clues, but a highly clever and obsessive mind, he exposes closely-guarded secrets, for which people in high places are willing to kill. He follows a lead and gets close to an unsuspecting activist named Laura Rose (Mbatha-Raw) to unravel a mystery that carries him from the jazz clubs in Harlem to the hard-edged slums of Brooklyn and, finally, into the gilded halls of New York’s power brokers, culminating in a showdown to save Laura Rose and his own life.

With a 144 minute run time, and the “bad guy” pretty much determined early on, the film became a drawn out “why they did it” versus whodunit – with a tidy take on race relations. It should have given me greater pause when Norton, who is one of my favorite actors, referred to co-star Mbatha-Raw as a new actress on a nationally televised daytime talk show – to which I yelled, “Umm, Belle? Beyond The Lights? Even, Free State of Jones!”

And although the film highlights how politicians use crooked practices, along with imminent domain, to takeover public areas with nefarious intent, the mention of how Central Park was created – with the removal of farmers and those who lived countryside versus city – without a nod to the Black area known as Seneca Village didn’t make sense in a story that partially focused on race.

While viewing, I couldn’t help but make comparisons to films like “Devil in a Blue Dress” and “L.A. Confidential” that focused on earlier periods, and were solid mysteries that kept the audience engaged without lulling.

In sum, I found “Motherless Brooklyn” to have great casting and an interesting story, but in attempting to depict various issues it fell flat and was underwhelming. I haven’t read the source material, but believe this probably worked way better as a novel than it did on screen. I would rate it 2.5 out of 5 on the MMTrometer.