Happy Monday MMT Family!  We’re teaming with Allied-THA to give away passes to the Wednesday night screening of SPY starring Melissa McCarthy.  The screening will take place at the Pearl Theater – 1600 N. Broad Street. Want to put your name in the hat?

To qualify you must be a subscriber of this site and send an email to thinkmusicmovies@gmail.com with the subject line SPY and your full name in the body. Winners will be selected at random and notified on Tuesday night.

You can watch the movie trailer and read the synopsis below, and get additional info about SPY at the official website here.

Susan Cooper (Melissa McCarthy) is an unassuming, deskbound CIA analyst, and the unsung hero behind the Agency’s most dangerous missions. But when her partner (Jude Law) falls off the grid and another top agent (Jason Statham) is compromised, she volunteers to go deep undercover to infiltrate the world of a deadly arms dealer, and prevent a global disaster.

I truly haven't the words right now to express, so I'll share the beautiful sentiments of Mrs. Pinkett-Smith. RIP Kobe and Gianna Bryant. 😑🙏🏾 #Repost @jadapinkettsmith @download.ins --- Life is so fragile. This is the kind of loss that makes you deeply reflective. My prayers to Vanessa, her children and all of those who love Kobe and Gigi. This is a hard one. My heart is broken and bleeding everywhere today. This tragedy happened only a few miles from where I am. It’s heavy and it’s painful. Hug those you love. Don’t just SAY I love you. Show up and SHOW it! Rest in the arms of the Highest, Kobe and Gigi❤️ Prayers to the family of the pilot and the other two spirits that were accompanying Kobe and Gigi. RIP💕✨ 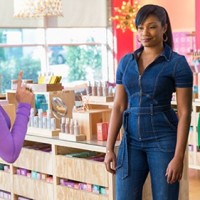