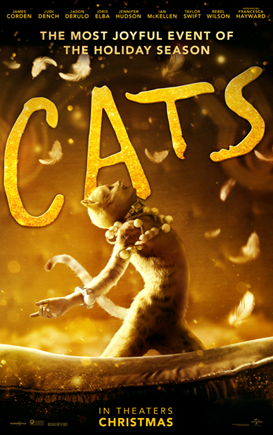 I know there’s a lot of talk about what the trailers have looked like, but I’m old-school and have seen the musical three times – my first experience being its closing weekend at the Winter Garden Theatre on Broadway, after it set the record for the longest running show on Broadway (at that time). With a theater set tailored for the play from top to bottom, and fantastic farewell performances, it was a magical experience to say the least. And my last two viewings here in Philly, including the show’s run earlier this year, were great – so, I’m more than willing to give this movie experience a try!

Featuring Lloyd Webber’s iconic music and a world-class cast of dancers under the guidance of Tony-winning choreographer Andy Blankenbuehler (Hamilton, In the Heights), the film reimagines the musical for a new generation with spectacular production design, state-of-the-art technology, and dance styles ranging from classical ballet to contemporary, hip-hop to jazz, street dance to tap.

Want to put your name in the hat? You must be subscribed to this website, and send an email to contests@musicmoviesthoughts.com with your full name and the subject line “Jellicle.” Twenty-five winners will be selected at random and notified by Monday afternoon, December 16.

You can get additional information about the film and watch the trailer at the official website here. CATS opens in theaters nationwide on December 20.