14 years ago, we met Calvin Palmer (Ice Cube), Eddie (Cedric the Entertainer), Terri Jones (Eve) and the rest of the eclectic crew in the original Barbershop film – where Calvin struggled with his desire to overcome financial burdens by selling the south side Chicago business his grandfather started, until he realized how vital the shop was to the community and the people who regularly gathered and worked. Two years later brought Barbershop 2, with Calvin and the barbershop staff facing gentrification and development issues in the neighborhood. And now Ice Cube and several original cast members – including the aforementioned, Sean Patrick Thomas, Anthony Anderson, and Deon Cole – and a few newcomers (Common, Regina Hall, Nicki Minaj) are back in the latest installment BARBERSHOP: THE NEXT CUT.

In this third film, directed by Malcolm D. Lee (The Best Man Holiday) and co-written by Kenya Barris (Black*ish) & Tracy Oliver (Survivor’s Remorse), the audience finds Calvin once again contemplating selling the shop – but for a more selfless reason this go-round, as his need to keep his teenage son safe in a community impacted by gang violence has become increasingly difficult. The film explores this timely and socially relevant theme, with a few other storylines, the usual amount of humor, and a few tense and serious moments that allude to violence, but are still very appropriate for mature pre-teens & up (it has a PG-13 rating, so use your discretion).

A few weeks back, I spoke with stars Ice Cube and Deon Cole regarding the film. When I asked Cole to share his experience (Black*ish) and thoughts on Barris as storyteller he replied,

“His writing is wholesome, but real and necessary. And he brings that realness to any project he does without beating people over the head – but where they feel, ‘Yeah this actually happens.’ As soon as I knew he was writing, and with Cube and Malcolm D. Lee attached, I prayed every night to be a part of it.”

And viewing this film, the audience is certainly not “beat over the head” but given a look into a very real issue facing communities across the country, with much-needed humor interspersed – and without a doubt it gets barbershop real (watch out for the R. Kelly and Cosby jokes!) with the comedic styling of Cedric the Entertainer, Anthony Anderson, Deon Cole, Lamorne Morris and J.B. Smoove.

There are several things I loved about this film, from the positive display of fatherhood (and how to handle disagreements, with Common and Ice Cube’s characters) to a perfectly cast cameo/appearance by Jamal Woolard – who played the lead in Notorious – as gang leader Marquis. And I always enjoy watching young actor Michael Rainey Jr., who starred with Common in the Sheldon Candis film LUV (see MMT review here) and who currently plays Ghost and Tasha’s son Tariq on the hit show Power.

My only complaint is I would have loved to see Calvin’s wife Jennifer, portrayed by Jazsmin Lewis who’s been in all three films, given more screen time. I think she deserves a little more than a bit part.

But, it was a welcome addition to see Regina Hall whose character (Angie) merged her beauty salon with Calvin’s shop to help them both financially – which brings a completely new dynamic, men vs. women, on most debates inside the shop. Add into this mix a possible love triangle – Eve, Common, Nicki Minaj – and I’d say this movie offers something for everyone’s enjoyment.

Considering MMT gave three opportunities to advance screen, I’m hoping many of the Philly area fam can chime in on this one! What were your thoughts on the film? Who attended the screening with the special appearance by Ice Cube and Deon Cole?

BARBERSHOP: THE NEXT CUT opens nationwide today April 15. And you can check out what Ice Cube told me about Cedric the Entertainer’s warning to the new cast members in my Examiner article here. 🙂

"Writer/director Victor Gabriel accomplishes a lot in an approximate 13-minute timeframe, forcing the audience to empathize through several stages of the characters’ grief until at last acceptance is achieved." 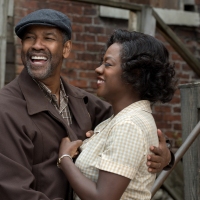